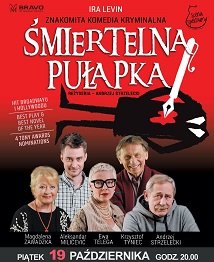 Deathtrap is one of the best criminal comedy ever written in the history. A play written by Ira Levin in 1978 with many plot twists and which references itself as a play within a play. It is in two acts with one set and five characters. In the play, Levin used plot reversals, unexpected turns of events, etc., and twisted and rearranged the pieces again and again.” Sidney Bruhl, a popular author of Broadway thrillers, apparently leads a happy and peaceful life in his home in Connecticut. In fact, he suffers from a lack of inspiration, which causes frustration and increasingly serious financial problems. He sees the chance to solve his problems when his student Clifford sends him the text of his first play and asks for his opinion. Together with his wife Myra, he devises a plan that will give him a fortune and eternal fame. However, not everything goes their way. The play is known as one of the biggest hits on Broadway, running for four years with almost 1800 performances. It holds the record for the longest-running comedy-thriller on Broadway, and was nominated for four Tony Awards. Deathtrap also won Levin his second Edgar Award, for Best Play, after his 1968 award for Best Novel.